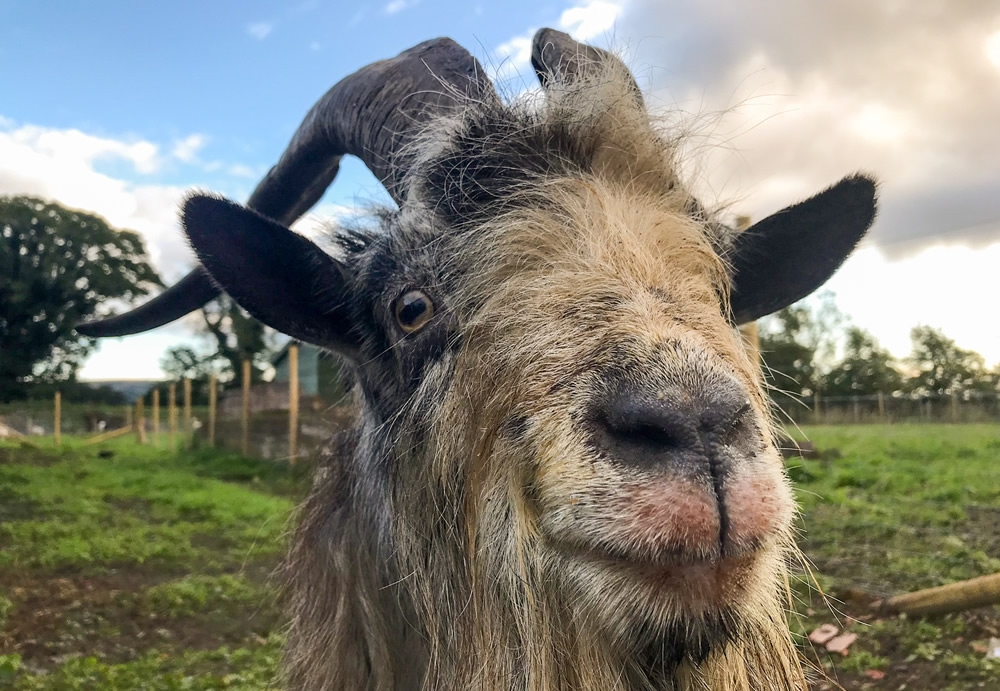 Goats have been around a long time. Some historians think that goats were domesticated before dogs. As man moved from place to place he took his goats with him.

Goats can be classified by their original habitat, to some extent. Goats with short ears and horns that spread away from their bodies are generally from colder climates. They tend to have longer hair and grow more cashmere (winter hair growth) during the winter. They tend to have flat foreheads and usually lack the "Roman Noses" of the desert goats, although, I have seen photos of goats in very cold climates that have Roman noses. Roman noses allow the air breathed in by the goats to be warmed a little in the cold weather and cooled a little in the desert before it goes into their lungs.

Goats from desert areas tend to have larger ears and smoother horns that tend to hug closer to their necks. Also they tend to have more prominant noses. They usually have shorter hair and usually grow less cashmere during the winter months.

Goats tend to come from areas that have little available water. They are usually afraid of water and absolutely will not wade in water (unless you train them out of this fear as young goats). They are able to go without water for longer than most other animals, excepting camels and giraffes. Some goats go into a water conservation mode if they fear water is slow in coming. They will stop urination and recycle the moisture for a period of time. They have the ability to pant (like a dog) as well as sweat like a horse. If they are overheated they will pant first and sweat as a last resort to keep their body temperature in control. Some goats are known to raise their body temperature 5 or 6 degrees during the summer to reduce the amount of sweat or panting required and conserve moisture.

Another trait of goats for water conservation in warm areas is those large pendulant ears. They have a large number of blood vessels in them and they radiate heat to help keep the animal cooler and reduce the need for panting or sweating. Likewise, the horns on goats are full of blood vessels and when they have been working, running or fighting they will radiate a large amount of heat through their horns. The horns can be quite warm to the touch.

Goats are agile and very coordinated. They have split hooves and their hooves grow rather fast, allowing for softer bottom surfaces that will cling to rocks and other surfaces. If they are not able to walk and climb they often have hooves that out grow their climate and need to be trimmed. They are good climbers and will climb objects to access more food and escape predators. That includes your fence, your trees, your dog house and your new car.

They are very inquisitive and great explorers and can just about get anywhere ... 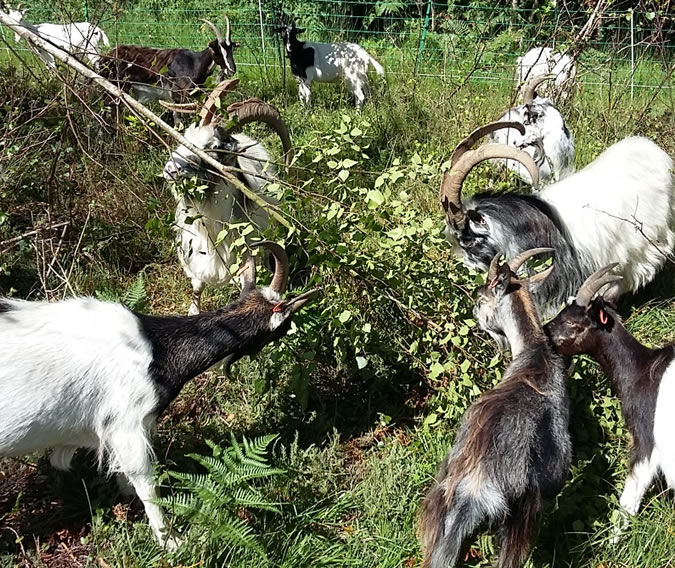 So what do goats really eat?

Contrary to what a lot of people believe, goats will not eat anything. They are primarily browsers as opposed to grazers. They eat more woody type plants than grass. Weeds and tree leaves are much more desirable to their taste. They will try out all the items in the pasture or location where they are eating and determine what they like best. They have "prehensile" lips and can isolate their favorite plants very well. They will predominately eat what they like best until it is all gone. Goats consider poison ivy, milkweeds, small brush, green briars and many other plants like that as candy. They will be eaten to extinction if you have enough goats in the pasture.

Goats digestive tracts and the bacteria that inhabits them are geared to digest more cellulose than most other animals. While it only takes a few hours for the food to make it all the way through a cow, it takes about 4 days for the food to make it through a goat. They digest almost all of the seeds that they eat and virtually all of the weed seeds.

They do have a quite enviable dining habit. They get up late, eat as much as they can in a couple of hours and then find a shade to chew their cuds through the hot part of the day. They will get up and follow the shade around the tree. Unlike sheep, they come home to bed each night, normally...